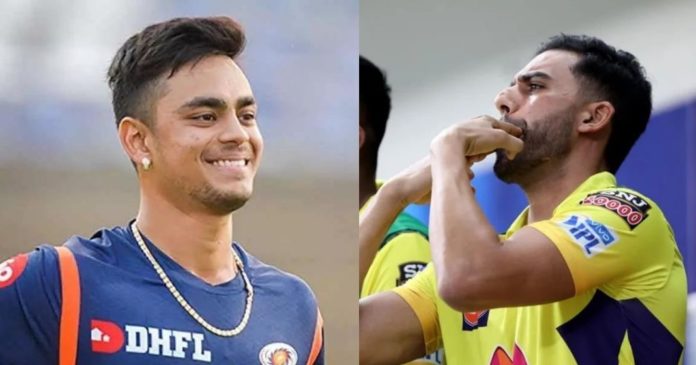 The recent IPL 2022 Mega-Auctions threw up a few surprises in terms of the trends that developed. At a mega-auction, teams usually are conservative while picking players. However, at the IPL 2022 Auctions, we saw franchises splurge on cricketers, sometimes on those who are yet to establish themselves. In this article, we take a look at a playing XI of cricketers who got sold for INR 10 Cr and more in IPL 2022 Mega-Auctions.

One of the major reasons for frantic purchases is the difference between supply and demand. With two more teams in the fray, all franchises had an interest in procuring cricketers who could make it to the core of the unit. Hence, a few players earned massive contracts,

Ishan Kishan and Liam Livingstone will be the openers in this playing XI of cricketers who got sold for INR 10 Cr and more in IPL 2022 Mega-Auctions. While it was expected that Ishan would easily breach the INR 10 Cr mark, Liam Livingstone was also all set to earn big money. Considering he has not done well in IPL so far, Liam’s price might be high but he has superb potential. Moreover, amongst the other big hitters in the Punjab squad, Liam could do really well.

Shreyas Iyer will captain this squad. He will join KKR from IPL 2022. A price of above INR 10 Cr was always on the cards for him. Hence, there was no major surprise. Since teams wanted a reliable wicket-keeper, there was a mad rush for Pooran. Teams like SRH and KKR had an interest in him. Eventually, SRH signed up the West Indian.

It will be a long list of all-rounders for this playing XI of cricketers who got sold for INR 10 Cr and more in IPL 2022 Mega-Auctions. Wanindu Hasaranga was a major surprise at the auctions. While the demand for him was understandable, a price of above 10 Cr felt a little high. He will lead the spin attack for RCB from IPL 2022. It is only one season that Harshal has done well and yet, he made more than 10 Cr. He will now be under pressure to continue his form. Both Shardul and Deepak were expected to do well at the auctions. Considering they offer some batting, their bids also easily crossed the INR 10 Cr mark.

Lockie Ferguson will play for Gujarat Titans from IPL 2022. He will partner with Mohammed Shami in the pace attack. Although he came a little late in the list, there was no shortage of admirers for Avesh. LSG signed him up for 10 Cr. Had it not been for the ODI series, Prasidh would have earned lesser. However, he will now walk away with a package of INR 10 Cr.