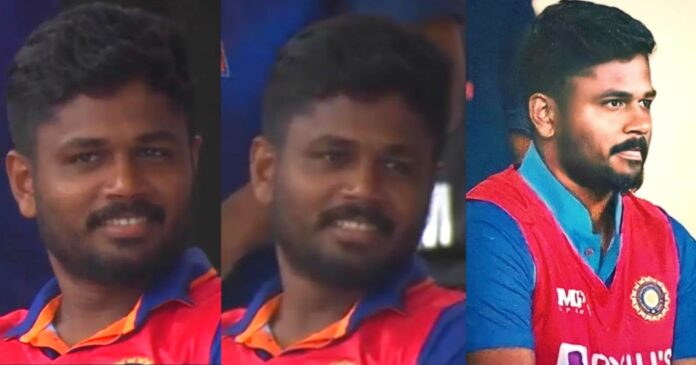 For the second ODI in Hamilton, India went in with two changes. While Deepak Chahar replaced Shardul Thakur, Deepak Hooda replaced Sanju Samson. The Kerala batter had done well in the first game and hence, it was a surprise to see him getting benched. Here, we take a look at how Twitter reacted to Sanju Samson getting dropped for the 2nd ODI despite doing well in the first game.

Sanju Samson is in dire need of chances to showcase his skills. While he did not get a single game in the T20I series, a similar thing is happening in ODIs. Despite scoring a useful knock in the first ODI, Sanju has not been backed. Although the likes of Suryakumar Yadav and Rishabh Pant also failed, it was Sanju who had to face the axing. Deepak Hooda has come in mainly to give support to the bowling attack.

Twitter reacts to India’s selection for the 2nd ODI

Twitter was naturally unhappy with the treatment meted out to Sanju Samson. Here is how Twitter reacted to Sanju’s absence from the second ODI against England:

Cricket craze gonna end here. Thanks to BCCI. from viru, yuvi to msd to sanju samson. Sanju is a victim of favourism running in bcci. Until it is stopped, I won’t be watching any matches of team india. Replacing inform batsman is ridiculous. No more tweets🤐🤐🤐 #SanjuSamson pic.twitter.com/cCfxMz8uMX

If they want to bring Deepak hooda, it’s surya Kumar yadav who has to sit out. Not Sanju Samson.

Understand why Hooda is being played, but Sanju Samson deserves a consistent run yaar. Just give him a decent run rather than these sporadic games. Has grabbed his chances this year in ODIs. #NZvIND

What is happening? Sanju Samson has now been dropped again. Is this joke?#SanjuSamson #RishabhPant

Whattt…dropped Sanju Samson today after playing him jst one match…why didn’t you go unchanged..bcs it was abt giving chances right…??Indian cricket management is surely confused but pretends that they know what they are doing @bcci @IamSanjuSamson

Pant is backed by his recent ODI form? SKY with his overall form (one format)? Apparently, nothing seems to be applied in the case of Sanju Samson.