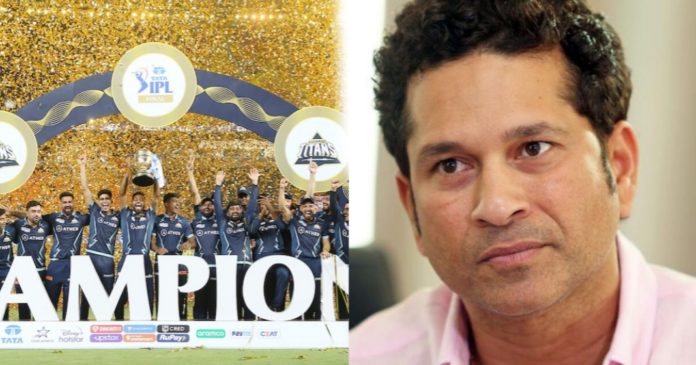 The Indian Premier League (IPL) 2022 is done and dusted and former Indian cricketer legendary batsman Sachin Tendulkar has selected his best IPL 2022 Playing XI. Tendulkar has included some interesting names in the team.

He revealed the team in a latest video uploaded on his YouTube channel. The special thing about Tendulkar’s team is that, he has also included players from Punjab Kings (PBKS) and Mumbai Indians (MI) into the XI.

Tendulkar said that he prefers a left-hand and right-hand opening combination, thus, Shikhar Dhawan and Jos Buttler are his opening duos. He said that the kind of a season that Buttler had, no one, other than him, deserves to be Dhawan’s partner.

The legendary batsman then picked KL Rahul at number three, and then kept Hardik Pandya for the fourth position and also the captain of the XI. Regarding Pandya, Sachin Tendulkar said that at No. 4, Hardik Pandya has shown tremendous form this season and played some important innings. He has tremendous power and his bat swing is beautiful. He further added that the consistency is really good when he wants to hit the ball. Sachin also said that Hardik was the best captain this season and was clear and active in his mind.

For numbers five and six, he enlisted the names of David Miller and Liam Livingstone. Miller has finished matches for Gujarat Titans on several occasions while Liam Livingstone has also batted brilliantly for the Punjab Kings.

Royal Challengers Bangalore’s finisher Dinesh Karthik has also been picked by Tendulkar as a wicketkeeper batsman.

He also talked about opening the bowling with Mohammed Shami and Jasprit Bumrah. Adding two leg-spinners Yuzvendra Chahal and Rashid Khan in the team along with them.