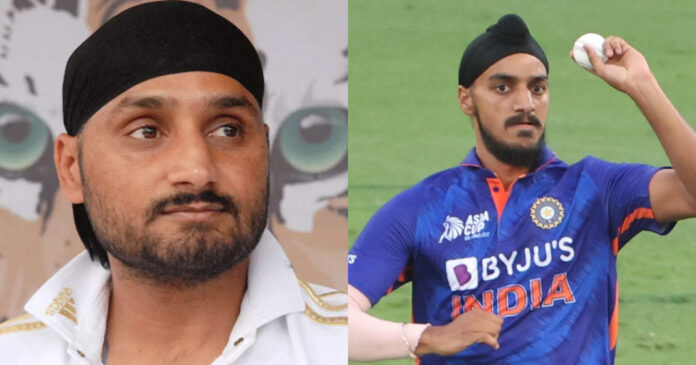 On Sunday (September 4), Team India locked horns with Pakistan for the second time in the ongoing Asia Cup 2022. As usual, the high-profile match had a late-night drama as Pakistan sealed the game by 5 five wickets with just one ball to spare.

Arshdeep Singh, who bowled the last over when Pakistan needed 7 off it, bowled superbly to take it almost till the end. However, the left-handed pacer has been facing heat on social media for dropping a sitter in the 18th over, which would have helped the Men in Blue tighten their grip on the match.

On the third ball of the 18th over, Ravi Bishnoi trapped Asif Ali as he mistimed the delivery and went towards the pacer. But to everyone’s surprise, Arshdeep put down a regular catch, following which captain Rohit Sharma gave a roaring expression as such was the importance of the wicket.

Former Indian cricketer Harbhajan Singh uploaded a post on Twitter extending his support to the young Indian bowler. “Stop criticising young @arshdeepsinghh No one drop the catch purposely..we are proud of our boys .. Pakistan played better.. shame on such people who r putting our own guys down by saying cheap things on this platform bout arsh and team.. Arsh is GOLD,” the tweet read.

Speaking of the game, Mohammad Nawaz was adjudged for his 42 off just 20 balls which kept the required run-rate in check during Pakistan’s chase. On top of that, he also bowled an economical spell, giving away only 25 runs in his four overs of spells along the wicket of Suryakumar Yadav.

Rohit Sharma’s side will next face Sri Lanka on Tuesday (September 6) at the Dubai International Stadium. Notably, they have to win both of their remaining games to earn a ticket to the finals.