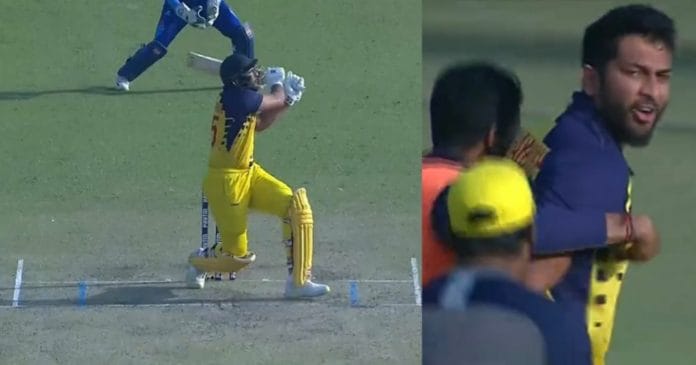 A 37-ball 46 from Abhinav Manohar helped Karnataka cross the 150-run mark. They finished with 151/7 in their 20 overs. Kishore was the best bowler for Tamil Nadu, returning with figures of 3/12.

Shahrukh Khan turned the match with a 15-ball 33*

Shahrukh Khan played an unbelievable cameo of 33 runs from just 15 deliveries and helped the Tamil Nadu cricket team win the match on the final ball. Five runs were needed off the last ball, and Khan smacked a maximum. Here’s how Twitter reacted to that shot:

Tamil Nadu hold their nerve & beat the spirited Karnataka side by 4 wickets to seal the title-clinching victory. 👏 👏 #TNvKAR #SyedMushtaqAliT20 #Final

The final solely belongs to 2 players from Tamilnadu, @saik_99 with the ball and @shahrukh_35 with the bat, and it was fitting to see them both at the crease WINNING it for @TNCACricket at the end.
They’re knocking the doors of TEAM INDIA nice n hard. #BestintheBusiness❤️ #SMAT

The shot of the day for me came from @saik_99 , wonderful no look boundary mirroring Martin Guptill in the last over. #SMATFinal #TNvKAR

Shahrukh Khan is the hero for Tamil Nadu, need 5 runs in the final ball and he smashed a six. What a hit, SRK in the Syed Mushtaq Ali final.

shahrukh khan did the job 🔥🔥!!
Tamilnadu become the Champions of syed mustaq ali Trophy 2021!!
5 needed from 1 ball at one time and shahrukh did 😀 #SyedMushtaqAliTrophy #TNvKAR pic.twitter.com/psXpbmhwAz

Shahrukh Khan the beast, a six on the final ball.

Tamil Nadu are the champions of Syed Mushtaq Ali Trophy 2021. What a win for them, what a final.

5 needed off 1 and SRK hits a six off the final ball to take Tamil Nadu over the line! 💥💥💥

In the end, it had to be SRK who wins all the hearts! ❤️#SyedMushtaqAliTrophy #SaddaPunjab #PunjabKings

It’s time Shahrukh Khan transitions from one yellow jersey to another. Make it happen da @ChennaiIPL

When Shahrukh Khan came to bat Tamil Nadu needed 54 runs from 24 balls and he scored 33* runs from 15 balls including 1 Four and 3 Sixes against Karnataka in the Final of Syed Mushtaq Ali Trophy 2021. What an Innings from Shahrukh Khan. pic.twitter.com/e2NXyVzHHw

Shahrukh Khan has shown, once again, during this #SyedMushtaqAliTrophy that Punjab Kings should have used him better.