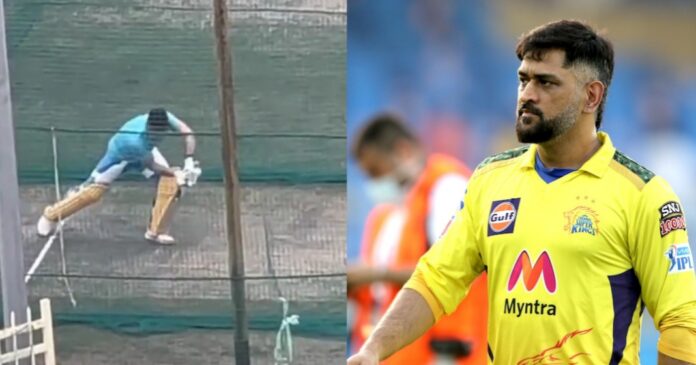 With just about 2 months left for the upcoming Indian Premier League (IPL) 2023 to commence, likely on the 31st March or in 1st week of April, the Chennai Super Kings captain MS Dhoni has hit the training ground in preparation for the tournament.

The men in yellow also known as yellow army, Chennai Super Kings (CSK) had a forgetful season the last time out in IPL 2022 despite winning the IPL 2021 edition beating the Kolkata Knight Riders (KKR) in the final.

The Super Kings’ captain MS Dhoni decided to hand over the captaincy responsibility to fellow Indian all-rounder Ravindra Jadeja before IPL 2022. However, the team had a terrible outing in the competition.

Even captain Jadeja’s performance was not so impressing. A injury later in the tournament for Jadeja meant that MS Dhoni was reinstated as the captain of the team, they still finished 2nd to bottom.

And now with some changes in the squad ahead of IPL 2023, Chennai Super Kings (CSK) will be hoping to lift the title again. Captain MS Dhoni have now hit the practice ground for preparing for the season.

But, after his first impression in the nets, the Twitterati feels that it is now time for the veteran Indian captain to retire and predicted that the IPL 2023 will be his last.

The preparation has started for MS Dhoni ahead of IPL 2023. pic.twitter.com/FUapARmL4P

Might turn out to be the last IPL for MS Dhoni, what a legend he has been! Love and respect always ❤️

He is 41 yrs old and still got it.. Just legend things.. 💙#MSDhoni𓃵 https://t.co/NSsKv6pvHh

One last ride! All the best, @msdhoni! 💫 https://t.co/aTqunliZES