Home Twitter Reactions “Petition to ban New Zealand from every World Cup in any sports... 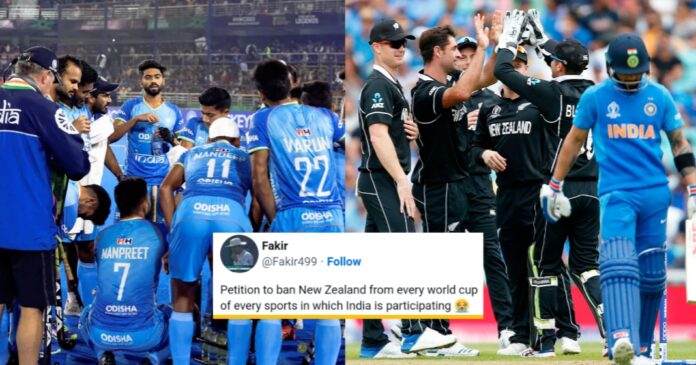 While the Indian cricket team continues to smash the visiting New Zealand cricket team in the ongoing One Day International (ODI) series being played in India. But there was another India vs New Zealand match, not cricket, was played yesterday on the 22nd January where the Kiwis came out victorious.

India is currently hosting the 2023 edition of the FIH Hockey World Cup. Team India took on the New Zealand team in the knockout round of the World Cup but it was actually the Kiwis who got the victory over the Indian team.

After the Indian hockey team’s defeat in the match against the New Zealand team, the Indian fans believe that there is a rivalry brewing the 2 sides in the competition, mentioning the India vs New Zealand rivalry in cricket.

While India have most of the time got the better of the New Zealand team in the cricket, it is actually the Kiwis who have disappointed the Indian team in the World Cup events.

Take it back to the year 2019, New Zealand handed India a heartbreaking defeat in the semi-finals of the ICC Cricket World Cup 2019. While the fans were optimistic about finally winning the World Cup after 2011, the Kiwis dealt a huge blow to the Indian team.

They were once again there in the ICC T20 World Cup 2021 when they beat India to not allow them to make a comeback in the tournament after suffering a defeat in the first match against Pakistan, eventually India couldn’t even reach the next round.

New Zealand continues to break the hearts of India in sports.

@BCCI : don’t worry people, we can arrange for one more NZ tour of IND and win the Paytm ODI/ T20 series.