Home Twitter Reactions “Next match is where Sehwag scored his double hundred, so you know... 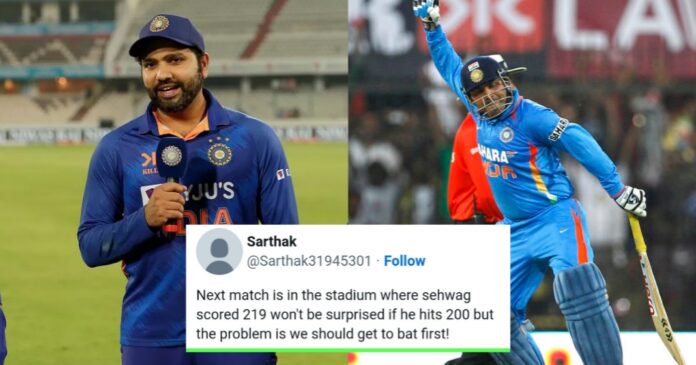 After a disappointing last couple of months for the Indian cricket team captain Rohit Sharma, he looks to be in good touch in the ongoing 3 match ODI series against New Zealand.

Rohit Sharma is going through a bit of a rough patch for the last couple of months and in a World Cup year, the Indian team fans want every players to be at their best in any matches they play this year.

Sharma is slowly slowly gathering pace in the currently ongoing series against New Zealand where he has looked in good touch. In the first match of the series, he scored 34 runs from 38 balls while in the 2nd match he scored a brilliant half-century before was dismissed.

Sharma has been playing the role of a hard-hitting batsman while his partner Shubman Gill focuses on the anchoring part of the game. After his half-century against New Zealand in the 2nd ODI, Rohit said in the post-match ceremony that he feeling good of late and feels there is a big score round the corner for him. Meanwhile, Twitterati pointed out that the next match is to be played at the Holkar Stadium in Indore on the 24th of January, the same venue where Virender Sehwag scored his double hundred.

As such, now even fans are demanding a double hundred from the Indian team captain.

Rohit Sharma said “Big score is around the corner (smiles)”.

Next match is in the stadium where sehwag scored 219 won’t be surprised if he hits 200 but the problem is we should get to bat first!

Double century is around the corner 😄

Hope it comes real soon. Eagerly waiting for his 💯

Why I feel it’s gonna be a daddy hundred 🙂 https://t.co/zSepAVYeYv