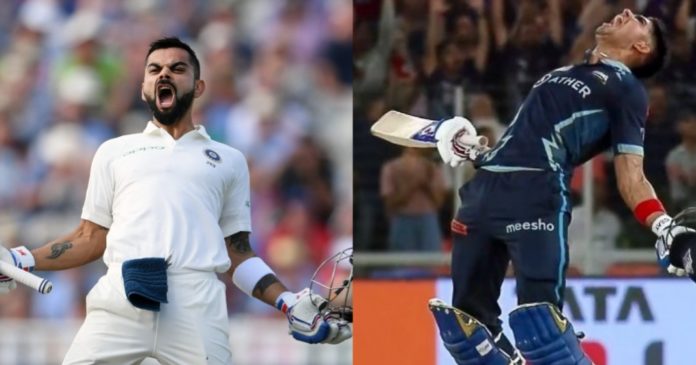 Shubman Gill won the Indian Premier League (IPL) 2022 for Gujarat Titans with a Six of the first ball of the 19th over, but he also won hearts of many Virat Kohli fans, thanks to his celebration after winning the match, which quite a lot resembles to Virat Kohli himself.

It was the home team Gujarat Titans who won their first ever Indian Premier League (IPL) Trophy in their first season and first attempt as they beat the Rajasthan Royals in the final by 7 wicket in Ahmedabad’s Motera Stadium.

After winning the toss, Rajasthan Royals skipper Sanju Samson opted to bat first. And even though they got off to a flying start thanks to opening duo of Yashasvi Jaiswal and Jos Buttler, but once Jaiswal got out, it all just turned around.

Rajasthan Royals could only put 130 runs on the board, setting a target of 131 runs. Even though Gujarat Titans faced some obstacles in the chase, it was Shubman Gill who made it smooth sailing win for their team.

Gill hit Obed McCoy for a Six of the first ball of the 19th over to get his team over the line. However, the roar of Gill after hitting that Six has won many fans’ heart, which quite a lot resembles to Virat Kohli’s lion roar.

That roar from Gill in the end after hitting the winning shot was very much like Kohli of the old.

reminiscent of kohli’s 2014 celebration v SA…
Hope he repeats it for india one day in a world event finale!❤️#Gill #IPL2022 pic.twitter.com/xwRaZOqSRm