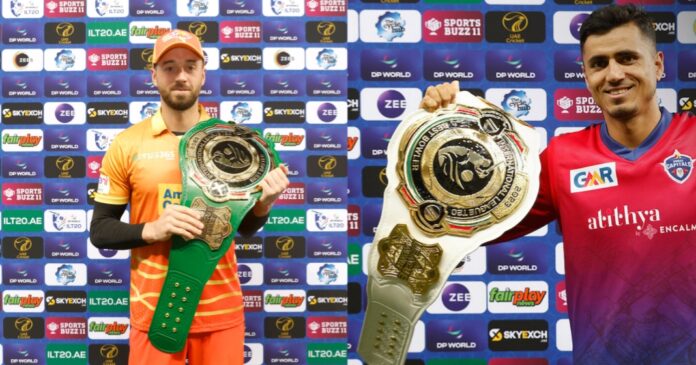 There is a huge competition brewing between two of the rising T20 cricket league in the world between the SA20 League in South Africa and the International League T20 (ILT20) in the United Arab Emirates (UAE).

But meanwhile, the ILT20 have brought in a concept that is hugely different from any cricketing tournament as they try to fend-off the competition from the SA20.

The ILT20 have introduced a belt system just like the cap system in the IPL which is being awarded to the most run scorer and most wicket-taker in the competition. Meanwhile, the winning team will also get a belt while the Most Valuable Player (MVP) will also get a belt at the end of the tournament.

And these are not just any belt, but these are replica of somewhat same looking belt with different design as like the WWE belts. After this, the Twitterati have been making fun around it on social media, we have gathered some of them here.

A true Captain’s innings by @vincey14 makes him the guardian of the green belt (highest run scorer of the tournament currently)!

Here’s hoping for more stellar knocks from him…

Every single cricket league needs to have a championship belt. This is outstanding https://t.co/OLu6MVucgY

.@Mujeeb_R88 poses with the DP World ILT20 white belt (the highest wicket-taker to date). He has bagged 4 wickets in total to hold the top spot.#DPWorldILT20 #ALeagueApart pic.twitter.com/ND0fNkrNen

Who cares about WWE league

New Concept : The Highest Run Scorer Will Get A Green Belt Instead Of A Cap In The #ILT20#RobinUthappa Must Have Felt Like This Today 😆#DCvGG #ADKR #DubaiCapitals pic.twitter.com/3u7qg0xtGx