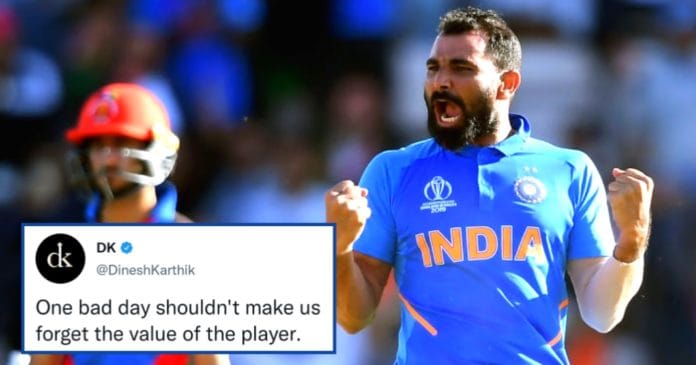 Indian cricket team’s star pace bowler Mohammed Shami has been targeted with online abuses from a section of fans who are disappointed with India’s defeat against arch-rival Pakistan in the T20 World Cup 2021.

The Indian cricket team suffered a massive defeat against Pakistan in the ongoing T20 World Cup 2021, where the latter registered a huge 10 wicekets victory over India.

With that, the whole of India is disappointed and sad, and a section of those fans have targeted Indian pace bowler Mohammed Shami with online abuses towards the Indian pacer. They blame Mohammed Shami’s performance against Pakistan as they reason behind India’s loss, while many says that as Shami is an Indian muslim, he didn’t performed to his max. Shami bowled 4 overs and was hit for 43 runs.

But the other section of supporters have come out in support of the Indian pace bowler, including the former Indian cricketers, the likes of Sachin Tendulkar and many more.

A number of fans are sharing Mohammed Shami’s hat-trick video against Afganistan from the ICC Cricket World Cup 2019, due to which, India survived from an upset against Afganistan. While some are sharing strong messages in support of the Indian speedster. Along with Shami, fans have also targeted UP based bowler Bhuvneshwar Kumar.

India suffered a heavy defeat against Pakistan for the first time in any World Cup event. In response to India’s 151, Pakistan comfortably chased it down with 10 wickets still in hand.

India struggled early on losing 2 wickets for just 6 runs. Virat Kohli and Rishabh Pant took India to a fighting position with the former scoring a fifty. India ended the inning with 151 runs.

In response, Pakistan gave no chance to Indian bowlers as they registered 10 wickets win. India now next take on New Zealand on the 31st October.

Below are some of the tweets from the Twitterati who came out in support of the Indian pace bowler.

When we support #TeamIndia, we support every person who represents Team India. @MdShami11 is a committed, world-class bowler. He had an off day like any other sportsperson can have.

I stand behind Shami & Team India.

He is so talented and humble person of the indian cricket , how anyone can say a word #gaddar to this Man . #Shami
This is #Shameful . 😔
Just take a look of his efforts while bowling.
I believe in Shami 🇮🇳✊. pic.twitter.com/yd5lB2YJyl

8 years, 355 international wickets and so many match-winning performances 🙌

We are immensely proud of what @MdShami11 has done for 🇮🇳 every time we needed it! 🙌

We stand with #Shami bhai. More power to you 💪 pic.twitter.com/RLYmK1ZYLy

#Shami you are honest and simple, Do not pay attention to such bad people. Those who are intelligent and good know how simple and sweet you are #wearewithyoushami pic.twitter.com/pWpXGKnGWV

Mohammad #Shami we are all with you.

These people are filled with hate because nobody gives them any love. Forgive them.

The online attack on Mohammad Shami is shocking and we stand by him. He is a champion and Anyone who wears the India cap has India in their hearts far more than any online mob. With you Shami. Agle match mein dikado jalwa.

We love you @MdShami11 🇮🇳 #Shami

Mohammed Shami has been a stellar performer for India for eight years, playing a significant role in many a victory. He can’t be defined by one performance. My best wishes are always with him. I urge fans & followers of the game to support @MdShami11 and the Indian team.

One bad day shouldn’t make us forget the value of the player.

If you support a team, you support each and every player…today and always! @MdShami11 pic.twitter.com/ABUyLsf9iM