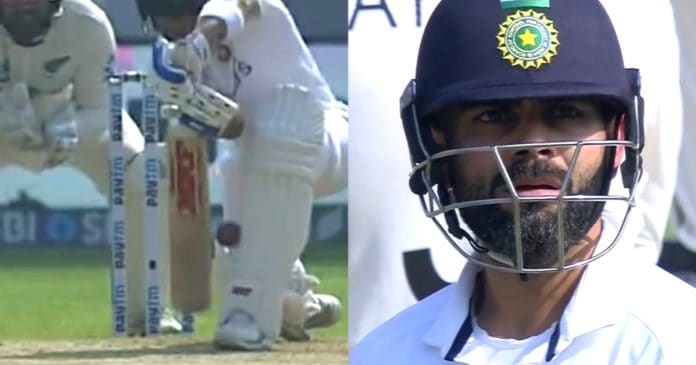 The 2nd Test match between India and New Zealand has begun in Mumbai’s Wankhede Stadium. And Twitter has been buzzing as Virat Kohli was given LBW out in a controversial decision.

The series between India and New Zealand currently hangs in the balance as the first outing between the two sides ended in a draw in Kanpur. And the result of the 2nd Test will decide the series winner.

The coin today fell in favour of the Indian cricket team captain Virat Kohli, who took no time and opted to bat first. India got of to a great start as Mayank Agarwal and Shubman Gill formed a 50 run partnership for the 1st wicket.

Shubman Gill missed out his fifty he was dismissed by Ajaz Patel. Soon after, Cheteshwar Pujara and Virat Kohli followed him too, again it was Ajaz Patel with the ball.

During the review, the 3rd umpire deemed that the gap between bat, pad is really close to the ball at the point of connection and the initial impact was not clear and went ahead with the umpires decision.

Virat Kohli looked furious and frustrated with the umpires’ decision as a result of which, he couldn’t even score a single run and got out for a duck off his 4th ball.

Shubman Gill and Mayank Agarwal added a 50 run partnership for India for the 1st wicket. But Gill missed out his fifty as he was dismissed for 44 runs.

Cheteshwar Pujara and Virat Kohli couldn’t contribute much as Pujara and Kohli were dismissed for 0. Mayank Agarwal kept on going and scored a century. As of writing this, the Day 1’s play is near its end and India has currently scored 194 runs for the loss of 4 wickets.

However, the most talking point of the match will remain Virat Kohli’s LBW out. The decision did not go well with the cricket fraternity as a number of cricketers and fans reacted to the umpires decision.

Here’s are the Cricket Fraternity in Twitter react to Virat Kohli’s controversial dismissal.

No improvement in technology …Still no Hot spot

Richest cricket board my foot pic.twitter.com/aJlk8L2EgE

Unlucky Virat Kohli, he dismissed for a duck, umpires call was vital in this decision. pic.twitter.com/WdKcBWictm

#ViratKohli @imVkohli @BCCI
If this is out then your choice of umpire is excellent ✌️
Clearly ball hits the bat first 😡😡😡😡😡😡😡
Next level of #umpire pic.twitter.com/5XK7qpuBhZ

I just found out that –

That Moment When #Umpire Virender Sharma Told The On-Field Umpire To Stay With His Decision After Checking The Footage. #ViratKohli #IndvsNZtest pic.twitter.com/PJfRYx12bM

Yes, bad decision is part of the game but this one against #Kohli is a Virat blow for Team India. #ViratKohli #CricketTwitter pic.twitter.com/horCCS3L0H

#Kohli decision was definitely not out. Yes, NZ has made a terrific comeback in this session but they also benefited from ‘VIRAT’LBW verdict. #INDvsNZTestSeries #NZvInd