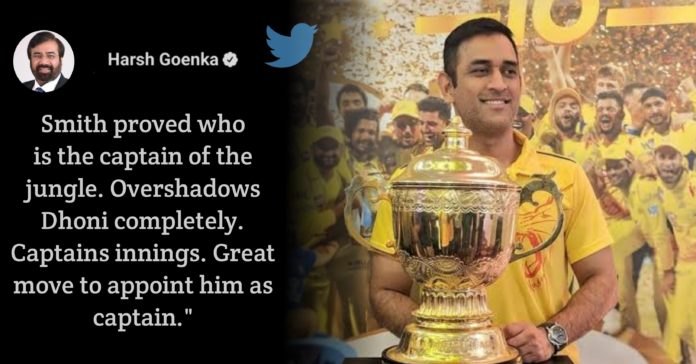 Mahendra Singh Dhoni is not just a name but an emotion for millions of people in this world. The Ranchi-based cricketer who started his life as a ticket collector ended it as a cricket trophy collector. Playing for India, Chennai Super Kings and Rising Pune Supergiant, Dhoni gained an enormous fan following.

He has retired from international cricket now, but Mahendra Singh Dhoni has continued to play for the Chennai Super Kings. Dhoni has made a career out of silencing his critics. Every cricketer faces criticism at one or other point of his life, but Dhoni has faced it with a cool and calm approach. In this unique listicle today, we will look at the five instances when MS Dhoni proved his critics wrong.

Hope You Know Who’s The Actual And Real King Of The Jungle Is. #MSDhoni Forever 🙏🏾#RPSvSRH #SRHvRPS #RPSvsSRH #Dhoni pic.twitter.com/4kArF1gxVS

Rising Pune Supergiant team owner Sanjiv Goenka’s brother Harsh Goenka was seemingly not a big fan of MS Dhoni. He once made a tweet against Dhoni, which drew a lot of backlash from the fans.

Harsh felt that new captain of Pune Steve Smith did a better job than MS Dhoni. However, in 2018, Dhoni returned as the captain of the Chennai Super Kings and guided them to the championship.

Before IPL 2021 began, former New Zealand all-rounder Scott Styris tweeted his power rankings ahead of IPL 2021. He put the Mumbai Indians, the Delhi Capitals, the Punjab Kings and the Sunrisers Hyderabad in the Top 4.

Interestingly, Styris, who once played for the Chennai Super Kings, placed the Chennai-based franchise in the last position. However, playing under Dhoni’s captaincy, CSK ended Phase 1 of IPL 2021 in the second position.

Rohit Sharma is the vice-captain of the Indian white-ball teams right now. Many fans consider him as one of the best batsmen in the world, but Sharma might not have achieved so much success without proper backing.

Although he scored less than 2000 runs in his first 85 ODI matches, Rohit received opportunities to play for India. At that time, some fans criticized MS Dhoni, but now the same fans praise him.

Like Rohit Sharma, Ravindra Jadeja is a current Indian cricketer who received many chances to prove himself under Dhoni. Jadeja initially struggled to perform consistently.

However, MS Dhoni’s backing helped him realize his true potential at the international level. Currently, many cricket experts rate him as one of the best all-format all-rounders in international cricket.

Mahendra Singh Dhoni won the ICC T20 World Cup in the year 2007. Soon, BCCI announced him as the new captain of ODIs as well. He got an opportunity to lead the Indian cricket team in the 2008 CB series, also featuring the Australian cricket team and the Sri Lankan cricket team.

Although he was not so experienced as a captain, Dhoni made some bold calls. In a meeting with selectors, he asked them to drop some senior players because they were slow fielders. The selectors agreed, and soon, the Indian cricket team won the 2008 CB series. Hence, the fans who were angry after the exclusion of seniors, were delighted to see the Men in Blue emerge victorious.

5 pairs of cricketers who are best friends off the field