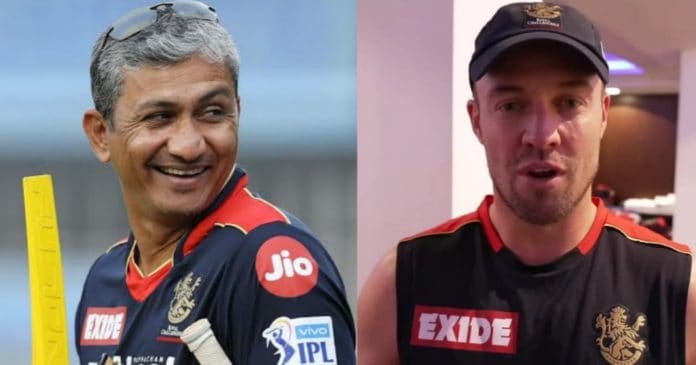 AB de Villiers recently announced that he would retire from all forms of the game. However, he could be a part of the competition in a different capacity. In this article, we take a look at the hint dropped by Sanjay Bangar which suggests that AB de Villiers could return to RCB.

Sanjay Bangar is the Head coach of RCB

Sanjay Bangar was the batting coach of Royal Challengers Bangalore in IPL 2021. A few weeks ago, RCB made the announcement that he would be the Head Coach of the franchise. The former Indian all-rounder gave a hint that ABD could return to the franchise. However, it will be in a different capacity.

Sanjay Bangar is currently one of the commentators for ongoing India vs New Zealand Test series. In a conversation with Aakash Chopra, Sanjay said that recently retired players are taking interest in different roles in a franchise.

This discussion got triggered when Aakash mentioned that with Rahul Dravid in the team, India may not require a specialist batting coach. However, he said that a Head Coach does not have much time as he must focus on other strategies and hence, a batting coach is required. He also said that if AB de Villiers is given the position of batting coach, then it will be a good thing for players and the team.

ABD and RCB association is very strong. Hence, it would not be a surprise if the player lands at RCB in a different capacity. It would also help the team and Virat Kohli in maintaining good form with the bat. ABD is a player who has done well in all formats of the game. This is something that other cricketers would want to do. Hence, ABD can pass on his experience to the youngsters.