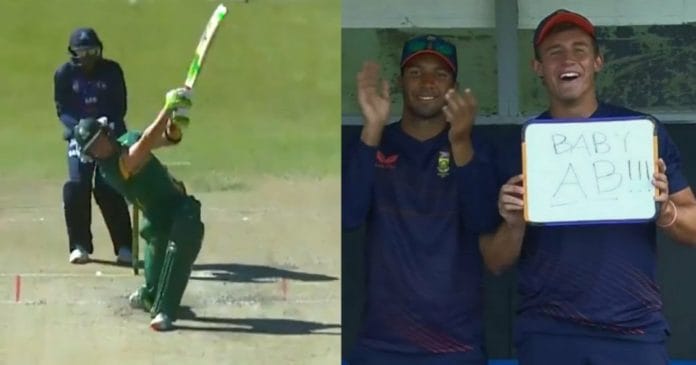 South African team is currently going through transition phase, where their most of the senior pros have now quit the game. South Africa have had some great names who have played for the team, Greame Smith, Faf du Plessis, Hashim Amla, Dale Steyn and AB de Villiers to name a few.

And it seems like that South Africa have found their next version of AB de Villiers. And it is none other than South African U19 team’s batsman Dewald Brevis.

The right-hand batsman has become quite so popular in the recent after his brilliant knock against India in their opening match of the ongoing U19 World Cup 2022, being played in West Indies.

The youngsters resemblances quite the same batting as to the South African legend AB de Villiers. Infact, he is even known as “Baby AB” in South Africa for that very reason.

Batting at number 3, Dewald Brevis played a brilliant knock of 65 runs against India U19 Cricket Team, lead by Yash Dhull. When he reached his fifty score, his teammates in the dugout flashed a placard which had “Baby AB” written on it.

An old video on the Cricket South Africa (CSA)’s official Twitter handle is also going viral after the youngsters batting performance against India, in which, Brevis is seen playing AB de Villiers like shot with perfection.

Even though South Africa lost the match, while Brevis and South Africa’s captain George van Heerden was at the crease, the Proteas were all favourite for the victory.

However, India’s left-arm pacer Raj Bawa managed to dismiss Brevis for 65 runs. After which, the Indian team fully took control of the match and dismissed South Africa for 187 runs and picked up a 45 runs win.

Earlier, with help from captain Yash Dhull‘s 82 runs, Team India posted 232 runs. India had lost 2 wicket for 11 runs at the start of the match, but partnerships here and there helped India post a fighting total.

But, one of the most memorable moments of the match will be Dewald’s batting.

👏 Dewald Brevis caught the attention of many in the SA U19’s opening #T20KO match.

🏏 How will he and the rest of the SA U19s go throughout the competition?

Dewald Brevis is known as “Baby AB” in South Africa and last night when he completed his fifty against India U-19, his team-mates showed it from the dressing room. pic.twitter.com/6AhmST0AJB

The planet that created @ABdeVilliers17 maybe cloned some of his DNA and put it onto Dewald Brevis
That’s the only logical explanation given we know AB isn’t from this planet https://t.co/qhbK5B2ygk

“Didn’t expect Ireland to put up such a fantastic chase, this is brilliant”- Twitter lauds Irish team for giving India a scare in 2nd...