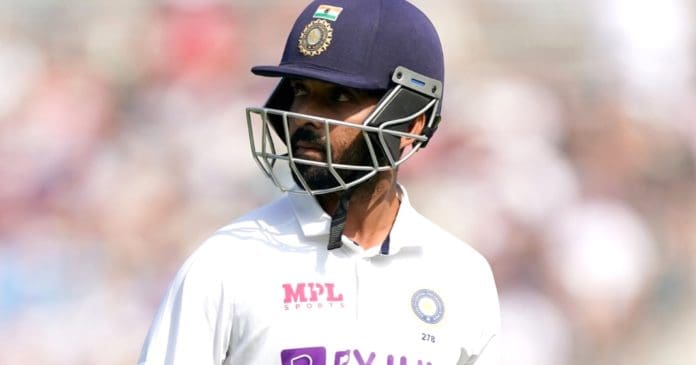 Indian cricket team’s stand-in captain for the 1st Test match against New Zealand in Kanpur, Ajinkya Rahane failed to contribute much to the team in the match, and the fans have to something to say about that.

The Indian cricket team is currently playing the first Test match of scheduled 2 match series against the New Zealand. As if writing this article, the Indian team is in critical situation as they have lost 6 wickets for 145 runs.

There was always a question mark on the selection of Ajinkya Rahane as the Mumbai batter has failed to contribute much to the team in the recent couple of years.

Even though Ajinkya Rahane was one of the backbone of the Indian team’s middle-order during his prime days, the batsman has dropped off majorly and has failed to contribute much.

In the 12 Test matches he has played this year, counting the first Test against New Zealand, Rahane has scored only 407 runs at an average of just 20. Last year too he didn’t had the best of times.

And with the emergence of some top quality middle-order batsman in the Indian cricket team setup, the likes of Shreyas Iyer and Hanuma Vihari, it is not likely that he will be with the Indian team for long.

In the 1st Test match against New Zealand, Ajinkya Rahane failed once again. The Mumbai born cricketer scored 35 runs and got out at a crucial time, while could only score 4 runs in the 2nd inning.

Ajinkya Rahane has been handed the captaincy for the first Test match in absence of Virat Kohli, who has been given rest for the 1st Test, but will be back as captain for the 2nd Test in Mumbai.

Here’s how the Twitterati has reacted to Ajinkya Rahane’s constant failure with the Indian Test team.

Struggle for Rahane continues, captain goes for 4 and India 41 for 3 – things getting worse for Rahane.

Rahane is a class player. He continues to look classy sitting in the dressing room. Class is permanent, batting in the middle is temporary.

A beautiful career comes to an end ! Thank You Rahane 🙏🏻 pic.twitter.com/tkBLIYvf6J

Me & my friend giving sympathy to each other after results.
Rahane & Pujara are those 2 friends 🤭😂#INDvsNZ #INDvNZ pic.twitter.com/1juUoQYAHM

Iyer has surpassed Rahane’s runs at home in 2021 in 2 innings.