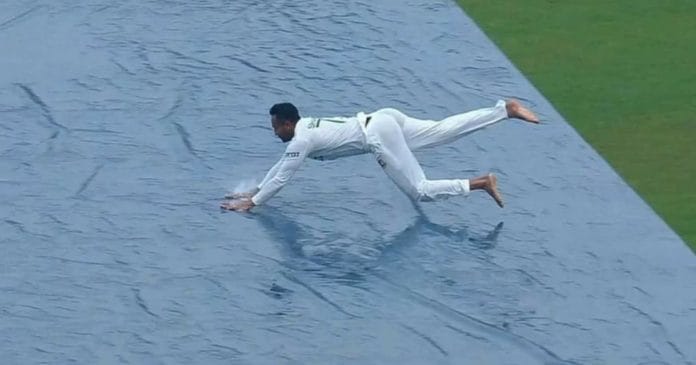 While the 2nd Day’s play of the 2nd Test match between Bangladesh and Pakistan was called off, Bangladesh cricket team all-rounder Shakib Al Hasan was seen hilariously sliding on the covers filled with water.

The Bangladesh cricket team is currently hosting the Asian neighbours Pakistan cricket team in a 3 match T20I and 2 match Test series. While the Pakistan team completed the clean sweep in T20I, the 1st Test match was also won dominantly by the Babar Azam led side.

The 2nd Test match between the sides began on the 4th of December in Dhaka. The coin fell in favour of Pakistan skipper Babar Azam who decided to bat first. Day 1 itself got a small interruption from rain but the play was resumed soon after.

However, the Day 1’s play came to an early end after the tea as because of light issue and darkness forced the umpires to declare stumps. Pakistan had scored 161 runs of 57 overs by that time.

The Day 2 began with light drizzle in Dhaka, forcing the play to be delayed once again. But after about 5 hours of wait, the match resumed. But it lasted only 6 overs as the rain started again and this time there was no stopping and the umpires called for stump on Day 2. Pakistan now find themselves at 188 runs for the loss of 2 wickets, adding 27 runs to their overnight total.

While the players and the fans were frustrated of the rain, Bangladesh cricket team all-rounder Shakib Al Hasan, on the way returning back to the pavilion, had something interesting on his mind as he ran towards the covers and took a long slide on the covers full of water. The funny incident led many fans to laugh a lot.

Here is how fans reacted to the Shakib Al Hasan funny incident.

All of us: "Day has been called off due to rain, let's head to the hotel"

At least Shakib al Hasan was having some fun while we waited for rain to allow us some action. #BANvPAK @Sah75official pic.twitter.com/K2tl63JStb