Home IPL 2022 Who is Subhranshu Senapati, all you need to know about Odisha youngster... 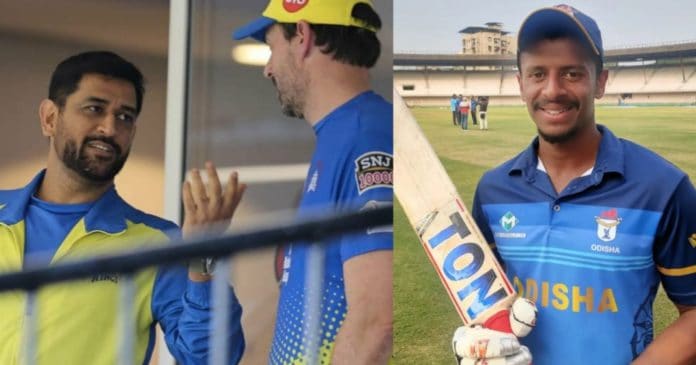 IPL 2022 Auction is the next big event that cricket fans across the world are looking forward to. The date for the mega auction has not been announced yet, but all the 10 franchises have kicked off their respective planning process for the mega auction. The defending champions Chennai Super Kings have reportedly begun their trials for the new season. As per Odisha Cricket Association, CSK called Subhranshu Senapati for the trials.

One of the recent tweets by the Odisha Cricket Association read: “Subhranshu Senapati Called for Selection Trials by the champions CSK in the IPL. Bringing you his batting highlights from the recently concluded Vijay Hazare Trophy & Syed Mushtaq Ali Trophy.”

Subhranshu Senapati has a strike rate of 122.26 in T20 cricket

Subhranshu Senapati is a right-handed batter and a right-arm medium pacer. The youngster was born in Keonjihar, and he generally bats in the top-order. He has played 34 first-class matches, 32 List-A matches and 26 T20s in his domestic career so far. Senapati plays domestic cricket for Odisha. He has never played in the IPL before.

Shedding some light on his T20 numbers, Senapati has scored 637 runs in 24 innings at an average of 28.95 and a strike rate of 122.26. His best score in the shortest format of the game is 67. So far, he has smacked 50 fours and 24 sixes. In the recently concluded Vijay Hazare Trophy, Senapati was the highest run-scorer for the Odisha cricket team. He scored 275 runs in five innings, smashing one hundred and two fifties.

In the Syed Mushtaq Ali Trophy 2021/22, Senapati scored 138 runs in five innings. He has not bowled much in domestic cricket. It will be interesting to see if gets an opportunity to play in IPL 2022 for CSK.

6 star players you might not know were once teammates in...

“We might be seeing this last time” – Zaheer Khan opens...